How To Be a Fair Parent

Many parents say:  “I always try to be fair to both my kids but they continually complain that I’m not. Where have I gone wrong?”

The truth is, every parent wants to be fair with their child, whether it’s settling arguments between siblings or making sure that no one is given more attention or goodies than their brother or sister. In fact, most of us put a lot of energy into keeping things as equal as possible. This is why it’s so hard to hear the oft-uttered phrase of a sobbing child, “You’re not fair!” It feels like a stab in the heart.

There are three instances when you are most likely to hear these dreaded words:

1. Getting involved in your children’s fights

Whenever you wade into the middle of a fight to listen to each of them explaining how awful their sibling has been, decide who’s guilty and mete out a punishment, you can be sure the one you ‘sided’ against will feel an injustice has taken place. They will believe you have not understood their side of things (even if you do) and may even see it as a sign of favouritism.

Mom: “You know you shouldn’t hit your sister even if she makes a face at you –that’s no excuse. Go to your room until you can say you’re sorry.”

Child: “But she’s always bugging me because she knows you’re going to stick up for her. You’re not fair!”

2. Making sure that everything is always equal

This can arise when you become overly concerned that everyone receives exactly the same amount of attention, hugs, things, treats, lessons, etc,. This type of ‘fairness’ encourages children to think about how much they’re getting instead of cooperating. When parents make an exaggerated attempt to keep the scales completely balanced, children tend to become hyper-vigilant about getting their due.

Dad (slicing the cake): “Now, don’t worry, I’m going to make sure you both get the same size piece.”

Sister: “Hey, his piece is bigger, that’s not fair!”

Dad: “Here let me put a little more on your plate to even it up.”

Brother: “Not fair! Now she’s got more than I do!”

This is a prime opportunity for your child to pull out the “you’re not fair” complaint. This ploy often strikes at a parent’s sense of guilt and is surprisingly effective at making you rethink your decision, which is precisely the point.

Child: “Mom, can I go to a sleepover at Amanda’s tonight?”

Mom: “No, not tonight. We have to be up early tomorrow to go to your ringette game.”

Child: “That’s not fair! You always have an excuse why I can’t go to sleepovers. I won’t be tired, I promise. Everybody else gets to do things except for me. You’re always saying no.”

Mom: “Well, I guess if you promise not to stay up too late, you can go -- but I don’t want to hear any complaints if you’re tired tomorrow.”

Remember that fairness is not necessarily about making your child happy at the moment but about prioritizing your family’s needs and making sure everyone’s rights are respected (including your own). No one in the family should be considered more or less important than anyone else, and following the rules and routines that you have all agreed on is always the fair way.

Being fair means not taking sides

Adopt the attitude that your children are capable of working out problems with siblings without your interference. It’s up to them to find a way to get along with their brothers and sisters. Each time you settle things for them, you take away an opportunity for them to learn about each other.

You also make tensions worse by creating feelings of favouritism. Instead, use family meetings to solve problems. Friendly discussions are more helpful than trying to settle each score for them.

Being fair means not worrying about making everything perfectly equal – that’s an unrealistic goal.

Have faith in your child that they can handle it when things aren’t exactly even. They won’t feel hurt or hard done by unless you give them reason to think they should feel that way. Give a good logical reason for why you aren’t treating them all exactly the same and leave it at that. “Your sister needs extra help with her homework because she’s having some difficulty with math this semester.”

“Your brother needs a new pair of shoes because he’s outgrown his old ones. Yours still fit you for now.”

Being fair means considering your decisions carefully before giving your answer, then following through.

When you stop and think before answering your child, you will have an easier time sticking to your decision. Consider why you are saying no. If it’s based on keeping to your routine, or helping your child keep up with responsibilities that have been agreed upon, you can feel more confident that your decision is ultimately fair. Also, it’s fair to consider how the request will impact the rest of the family. Give the reason why you are saying no; if your child is unhappy with it, acknowledge that she is feeling angry or disappointed. However, once you’ve made your decision, don’t do a flip-flop.

It’s important to stick to a ‘no’ when it’s needed.

“I don’t think you can go to your friend’s house today. You have a piano lesson and it will mean a lot of extra driving for me to pick you up. Perhaps you can get together another time this week.”

If your child consistently accuses you of being unfair, it’s time to pull up a chair and have a heart to heart. Sometimes, without even realizing it, we do things that just don’t feel right for a child. Our job is to listen to our child’s ideas and feelings and create a dialogue. Ongoing problems should be addressed to keep your relationship strong and teach your child how to work through problems. Be willing to keep an open mind and admit mistakes if you feel you should, but also help your child reframe their ideas by asking good open-ended questions. 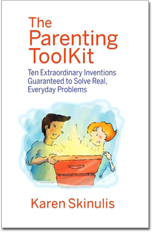 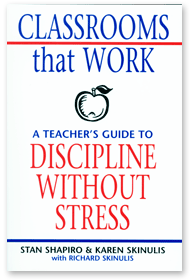 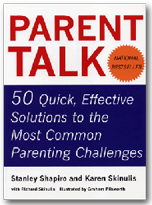